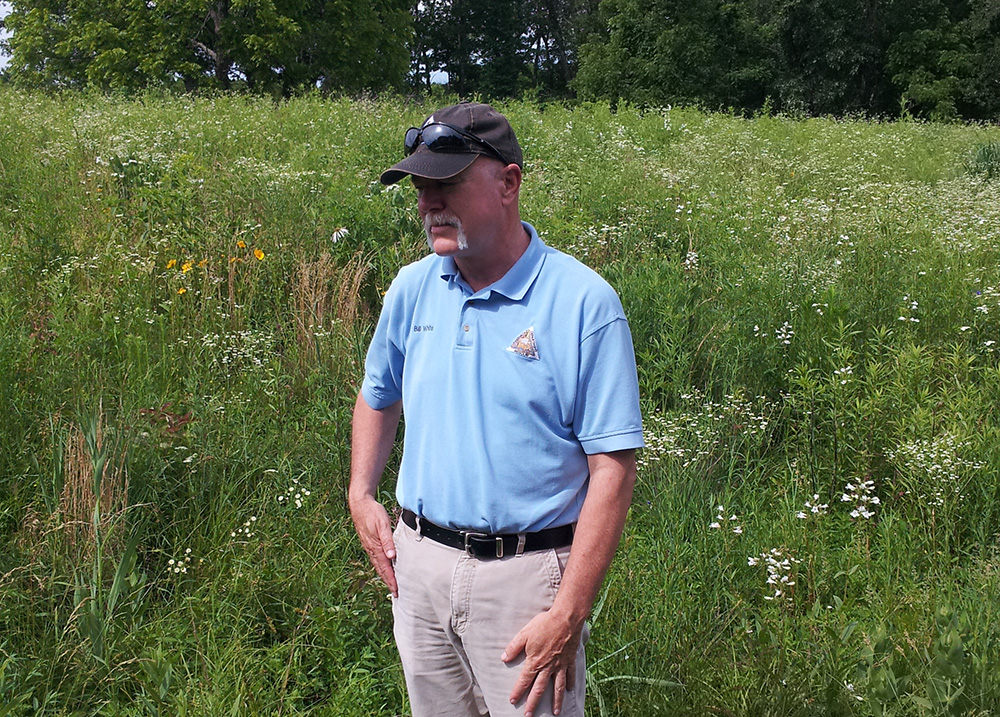 Reflections on a Career in Conservation
Bill White is the retiring Community and Private Land Conservation Branch Chief at Missouri Department of Conservation. In this roll, Bill supports landowners’ efforts to improve habitat through cost-share programs, initiatives, and outreach efforts. These projects ultimately benefit all Missourians through healthy soils, waters, and forests as well as abundant fish and wildlife.

Bill also cultivated partnerships throughout the state and played a pivotal role in Deep Roots’ beginning. His support and belief in the impact of organizations like ours was essential. And we are far from alone! Across the State of Missouri Bill has had similar impacts with other organizations and projects. Bill, in his quiet, good-humored, and visionary way has moved our community toward optimum function by enabling others to help carry the weight.

Deep Roots invited Bill to share with us his experiences as conservation professional. Please enjoy this Q&A we enjoyed with Bill and join us in congratulating him on his retirement. Send him a note – click here, and we’ll share it with Bill!

1. How did you get interested in conservation as a career choice?
I grew up on a dairy farm in Nebraska and was always surrounded by nature and those experiences. We built a lake when I was in Junior High and the animals attracted to that, which I never knew existed before then, made me want to know more and more. I then worked on a Youth Conservation Corps team at a brand-new state park and spent a lot of my spare time in the park and learned about more plants and animals that I had never seen before. The final straw was during my senior year in high school, we had a pond stocked with fish and it was fisheries biologists in uniform that delivered them, and I turned to my dad and said, “you can get paid to do this kind of stuff?”.

2. What education and background prepared you for a career in conservation?
I went to the University of Nebraska and got a B.S. in Agriculture. At the time they had no degree in fish and wildlife, but I took the classes offered in the wildlife option curriculum.

3. Where did you start your career?
I wanted to be a naturalist at a local park when I graduated, but there were no jobs in that arena. I started my career with the Nebraska Game and Parks Commission working on managing wildlife habitat and prairies on public lands around Lincoln, Nebraska. I worked there almost 7 years and that gave me the experience I needed to prepare me for my career here.

4. How/ why did you end up in Missouri?
I wanted to do more than just affect the wildlife areas I worked on, so I saw a few job openings in Missouri that presented that opportunity and landed a position in St Joseph. I was closer to the family farm there than I was in my previous job, so it was easier to help out when needed.

5. What positions have you served?
I worked as an Area Biologist and covered a territory that included Kansas City and most of Northwest Missouri. I put on a lot of landowner workshops, worked with landowners, and assisted staff from USDA and MDC related to private land conservation. In 2004 I moved to our Central Office in Jefferson City and became Farm Bill Coordinator for 5 years, the Private Land Field Chief for 4 years, and for the last 9 years I served as the Division Chief and Branch Chief for Community and Private Land Conservation.

6. What accomplishment(s) are you most proud of in your career?
I am most proud of building our programs with communities and knowing that those will continue to grow as we strive to connect more Missourians with nature. I am also very proud of the partnerships that we have developed over the years whether it be with agriculture organizations or partners like Deep Roots. I am also thankful for the opportunities I had to mentor and train hundreds of MDC and partner staff over the years. Finally, I seem to be a champion for the little guy, so have been a champion for declining species like quail or pollinators. I have had a major hand in educating staff and the public about what it takes to provide habitat for those species.

7. What is your favorite natural area?
There are so many to choose from! Probably the most fascinating to me are the loess hill prairies along the Missouri River bluffs in northwest Missouri. So many state-listed plants are surviving there that only exist elsewhere in central and western Nebraska.

8. How does your everyday work make the world a better place to live?
It does not matter whether I am sitting in front of a computer, training staff or participating in a meeting, I think I am indirectly making a difference for the resources or people of Missouri. The programs we manage or initiate get applied on the landscape by others and expand the conservation footprint on thousands of acres and impact 10s of thousands of Missourians.

9. Taking the long view, what improvements in conservation have you seen over time (a restoration project, community engagement, etc.)?
I’m trying to remind folks that much of our work doesn’t happen overnight, but incremental steps become significant. We have really come a long way in how we engage communities across Missouri and our partnership efforts in that arena have grown exponentially over the last 10 years. In general, the number of our partnerships have at least doubled since then.  We have some amazing partnerships with agriculture groups trying to integrate conservation into traditional agriculture practices. We have engaged the agriculture community in promoting native grasses for cattle or native forbs for pollinators. What is exciting about partnerships is that you never know where an agreement is going to take us as a partnership grows and evolves over time. We have accomplished some one-of-a-kind conservation efforts that no other state can match because of these partnerships.

Written by: Stacia Stelk Mark your calendars – Plan It Native is less than a…

Chuck Conner, Community Forester since April 2003 My favorite part of my job is working…

Dear Friends- I have always loved Earth Day. It’s always been one of my favorite…

Spring is almost here! This year, consider adding native plants to beautify and benefit your…