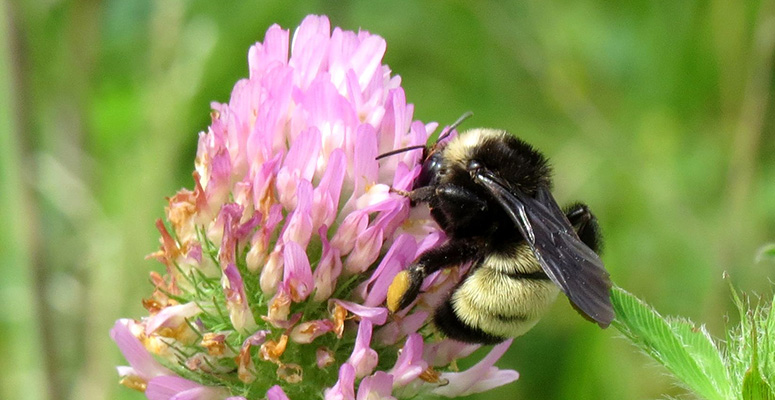 There are some masterpieces worth saving, and the American Bumble Bee (Bombus pensylvanicus) is one of them. Because of its specific grassland habitat requirements its population is in rapid decline in parts of its historic range. Rich Hatfield, Senior Conservation Biologist with the Xerces Society for Invertebrate Conservation, says that “the American bumble bee is a highly imperiled animal, and every remaining colony is essential to the immediate and long-term survival of this species.” We are fortunate to have a population of this bumble bee at Jerry Smith Park Prairie in South Kansas City.

The American Bumble Bee is one of the largest native bees in our area. They are one of the late emerging bumble bees so you probably won’t see the beautiful yellow and black queens foraging on flowers until June.

The fertilized queen bumble bees hibernate over winter. When they emerge in the summer they seek a nesting site just above the ground in a large clump of grass. They build several wax pots in the nest chamber. Through foraging trips to flowers like Pale Purple Coneflower, Horse Mint, and Beard Tongue Penstemon, they return with pollen and nectar that they deposit in the wax pots. Eggs are laid in the pot. When the larva emerge they feed on the pollen and over several weeks develop into worker bees. The queen then remains at the nest laying eggs and the workers forage for pollen and nectar. Bumble Bees are one of the few native bees to nest socially. The rest of the native bees are solitary nesters in the ground or in cavities.

Many Bumble Bees are more vulnerable to extinction than other creatures. This is because the bee colony has to remain undisturbed all summer before producing the next generation of queens. Also because the bumble bees require three different types of habitat to survive – foraging, nesting, and hibernating. Finally, they often require specific types of flowers for foraging. Any disturbance in these and the colony dies. The American Bumble Bee now has declined or is absent throughout much of its historical range. Scientists think it has declined so rapidly since the 1980s because it has lost much of the specific habitat it needs. They also think over-use of pesticide may play a role.

This bumble bee cannot survive in your backyard like other species do. It needs a high quality grassland environment to successfully hibernate, reproduce, and forage. It has the proper habitat combination at Jerry Smith Park Prairie. We should continue to maintain this diverse habitat to preserve this American masterpiece.

-Photos and text by Tom Schroeder 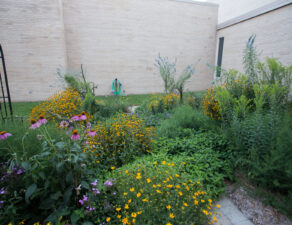 A classic beginner’s design mistake (we’ve made it too!) is to buy one each of… 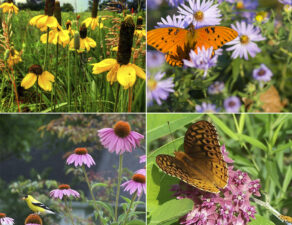 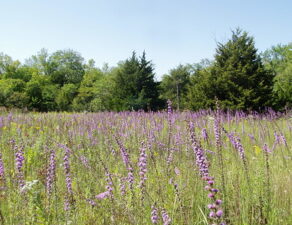 As a native plant novice, or someone looking to expand their newly found knowledge in… 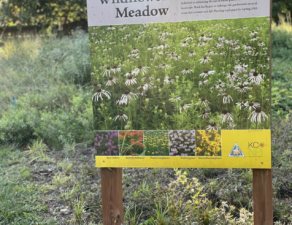 In 2019, Deep Roots embarked on a journey to “show” what a native garden… 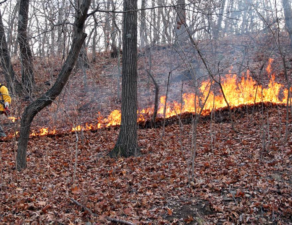 Originally imported from Asia, bush honeysuckle is an invasive and vigorous grower which quickly crowds… 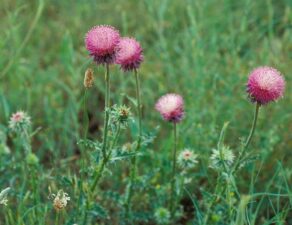 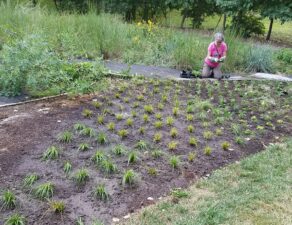 How much should I water my new native plantings? It’s a great question, and although there…